Home Business Want To Sell More? Stop Being A Wimp! Be A Black Belt!

Want To Sell More? Stop Being A Wimp! Be A Black Belt!


Some years ago I attended a sales seminar for martial arts professionals. The presenter was introduced as one of America’s top car sales reps- and they made it a point to tell us he was not a Black Belt. He looks us in the eyes, hands on hip and says, “Every one of you started martial arts as a wimp or a blimp!”

I turned to my wife, chuckled a little and said- “You know what, this guy is right!” He was right on two levels. First he wanted to impress on us that everyone sought our services with an agenda. Most people who start a martial arts program are looking for either fitness or personal development. He’d done his homework, most of us started the same way.

He also wanted us to know that in the sales process, many of us were still carrying some of our old baggage. When it came to sales, many of us were still wimps! Big tough black belts afraid to make a sales call. Afraid to pitch value against price instead of caving. Afraid to close even though we, of all people, actually live our lives utilizing the same benefits we share with our customers.

What are we so afraid of?

Every time I teach a group of sales professionals how to THINK Like a BLACK BELT, we inevitably talk about fear.

Here’s what sales people tell me they fear most:

Of course the answer to fear is courage. Careful though…

Fear is a natural part of our survival mechanism. Fear is nature’s way of keeping us from doing really stupid or dangerous things! Fear is only a problem when you let it stop you from picking up the phone, calling on a new prospect or working the room at a networking event. Courage is your ability to act despite your fear. Courage is a direct product of confidence. Confidence is developed through preparation, training and practice.

We can argue the psychology of fear and courage until your next quota is due, or we can focus on how to build confidence and express courage in the sales process. A Black Belt knows you never win a fight in the ring- you win a fight in the gym. Long ago Sun Tzu taught:

A great sales person knows you win a sale by:

And that means preparing, training and practicing as if your life depends on it. Whether you’re a black belt defending yourself against an attacker or a black belt sales rep trying to put bread on your family table…

Too Many Minds…The Art Of Focus 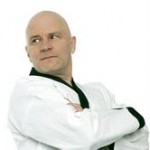 
Through martial arts, Jim Bouchard transformed himself from dropout, drug abuser and failure to successful entrepreneur and Black Belt. As a speaker and author of Amazon bestseller Think Like a Black Belt, Jim tours nationally presenting his philosophy of Black Belt Mindset for corporate and conference audiences.


He’s a regular guest on TV and radio programs including FOX News, BBC Worldview and FOX Across America.

View all posts by Jim Bouchard →

17 Responses to "Want To Sell More? Stop Being A Wimp! Be A Black Belt!"