Home Celebrity News Joan Rivers: A #2 Birth Order That Was In Control 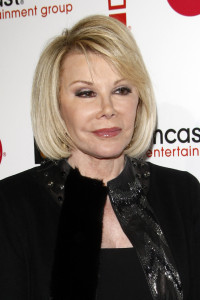 We lost Joan Rivers September 4th, 2014 and now we get a chance to see her life in terms of her birth order.

Daughter, Sister, Wife, Mother, Grandmother and Comedian are roles she has played. Her birth order influenced them all.

Born Joan Molinsky June 8, 1933 in Brooklyn N.Y. to Jewish immigrant parents. Two years earlier her sister Barbara was born. Both girls did well in school and both earned Phi Beta Kappa Honors at their respective colleges. Barbara went on to law school and became one of its youngest graduates. She later attended medical school and married Dr. Edward Waxler, a cardiologist, they had two children.

The Second born is the child that is characterized as Stubborn only because they want to control their own space. This birth order instinctively wants to dethrone their older sibling. First they copy everything they do. Later, if they see dethroning is impossible they strike out in a completely different direction. At an early age they develop a work ethic and can’t seem to stay still, always having a project. Money is very important to them for the security it brings not in the wealth itself. With enough money people can’t tell you what to do. This is true of both Bill Gates and Warren Buffett two of the richest men in the world. At the time of her death Joan’s Forbes estimated her net worth between 150 and 290 million dollars. Second borns also have a belief system that is hard to change for they see things not on a personal level but have their own standards of what is right and wrong. The Second born may go right when the others go left. They will rarely back down when they take a position. Joan would never apologize for her jokes even if they were in bad taste.

Joan as a Second Born

She started early in her life doing anything to “make a living”. Her big break was the Johnny Carson show. They hit it off right away; Johnny was also a #2 birth order. She made the mistake of taking an offer for a show that was in direct competition with Johnny and that ended the relationship. The Second born has a value system you don’t want to cross. Johnny was the first guest on her show but afterwards forbid any guests on his show that were guests on Joan’s show. Johnny a #2 would never talk to her again. Soon after her show was cancelled by Fox. Broke, she reinvented herself by started a company and selling her line of clothes and jewelry on the QVC shopping network. It is estimated she earned 50 million a year from QVC. She said, “There is nothing I won’t do, humiliation does not exist in my vocabulary”. She may have also controlled things in her marriage. She married Edgar her 2nd husband a few days after they were introduced. At the time he was a TV producer. As a #1 he may have been dethroned by his younger brother, an engineer for the Navy. Life was a struggle for Edgar, the butt of many of Joan’s jokes. They were married for 22 years. He committed suicide soon after the marriage had trouble and he and Joan were separated. This happened in 1987 after Fox fired her when she challenged their decision to fire him as the producer of her show.

Working to the End

In her last years Joan was co-hosting the E! celebrity Fashion Show, Fashion Police, as well as the reality series Joan & Melissa Joan Knows Best? Her self–deprecating humor and the plastic surgery she felt she needed to stay In show business will not be forgotten. She refused to bow to political correctness. “Don’t tell me what to do” says the Second born. Now. “Can we talk?”

For more information on birth order visit www.lifesfingerprint.com or buy the book Life’s Fingerprint How Birth Order Affects Your Path Throughout Life by Robert Hurst.