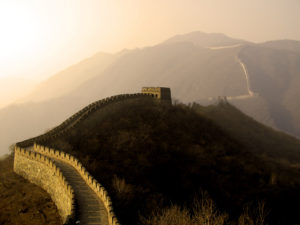 Millions of people around the globe ride bicycles, but I have never been so affected by bicycle riders than when I rode through the streets of Beijing, China.

That country houses 1.35 billion people. Their main transportation? The bicycle.

With 11.5 million people in the capitol city of Beijing, more than half of them bicycle to work each day. They use their bicycles so much for work they don’t think of them as recreation. The city lies on an arid plain in the northeast just below the Great Wall of China. North of the capitol, barren mountains conceal the tombs of the Ming dynasty. The countryside is rough and rocky.

Inside Beijing, it’s a world of black, one-speed bicycles with bells on the handlebars. Each bike is the same, with a small lock on the seat stays to dead bolt the spokes. A rear rack holds any amount of goods including chairs, tables, washed clothes, chickens in bags, hay, vegetables and children.

Shunning the busses, more than 4.5 million people ride their bicycles to work each day. I reached the city in autumn. With millions of bicycles, sidewalks and paths won’t do the job. In Beijing, triple lane, paved bicycle highways serve as the main arteries throughout the city. Where the traffic slackens, two lane roads suffice.

On my first morning riding around the city, I was stunned at the number of people pedaling slowly, at the same speed to their destinations. No one was in a hurry or passed others. No one shifted gears and everyone dressed the same. At every stoplight, bicyclists backed up by the hundreds. When the light changed, a large dark amoeba-like mass of people oozed into the intersection, some turning left or right, most going forward.

I couldn’t understand why they weren’t in a hurry until a lady stopped me in the street near Tiananmen Square.

“Are you an American?” she asked in accented English.

“Are you having a good time in China?”

“Yes ma’am,” I replied. “But I’m pretty curious about your bicycles. How come everyone is going the same speed? It looks like they’re going to a funeral.”

“Young man,” she said winking to me. “This is a socialist society. No one is allowed to get ahead of their neighbor, so why try to go faster?”

That statement struck me as I rode toward the mountains that week to see the Great Wall.

On the way, I visited the Ming dynasty tombs. Much like the Great Pyramids in Egypt, monarchs possessed grandiose needs to build elaborate monuments to themselves. The tombs proved no more than huge gray stoned basements about 50 feet underground, which took decades to build. The one I visited had two secondary chambers for the ruler’s wives. When he was buried, his two wives were killed, so they could be put into the tomb with him.

Unfortunately, the arches were too small to allow passage of the wives’ caskets. In order for the wives to be near their husband, the funeral procession carried the extra caskets into the main burial room. Seventeen trunks of jewels were left in the grave.

It seemed vain, but I’ve seen how the high and mighty around the world have created extraordinary monuments to their self-perceived greatness. The human race is truly a magical mystery tour.
Approaching the Great Wall, I had to climb more than a thousand feet. The wall loomed across the mountainous skyline in front of me. A rush of feelings swept through my mind.

When I was a kid, I saw a picture of the Great Wall in a history book. I told myself that someday I would walk on it. On that cold November day, I cranked hard on the pedals, closer and closer to my boyhood dream. When I reached the wall, a hoard of Chinese gathered around me, trying to sell T-shirts, flags and other trinkets. After buying a shirt, I parked my bike alongside one of the stairs leading to the top of the wall.

Climbing up those steps was like being on the end of a 20 year dream.

I don’t know what it was that drew me to that wall as a kid, but there I was, as a man, walking into my dream. I didn’t shout, nor was I excited. I walked up to the top of that wall with a deep feeling of gratitude.

Around me, treeless brown mountains stretched to the north as far as I could see. The wall stretched more than 5,000 kilometers across the top of China. It took hundreds of years to build–sacrificing millions of lives. The wall stood more than 30 feet high and 20 feet thick. It had towers at high points on the tops of mountains where it peaked and ran east and west for as far as I could see.

Several hours later, I headed back to Beijing. Sometimes, when I see such wonders of the world, I think I’ve experienced the greatest moment of my life. But down the road, something else pops up. It may not be as spectacular in comparison, but in its own way, it holds something special. Each country I visit offers different cultural flavors. I’ve seen good things and bad things, and people to match. Sometimes, I’m in such beautiful places that I want to stay forever–to be forever happy. But life won’t allow that kind of happiness. No matter how beautiful, or how much fun some experience is, I can’t hold onto it. I have to move into the next day, or a new day will dawn on me no matter what. I carry wonderful memories, but each experience prepares me for the next moment.

I looked back at the Great Wall as I coasted down the steep grade. One more glance. It was gone. My dream became a dream again.

Australia: Dancing With Dolphins In The Water

We Turned Up A Dirt Road Today: Hawk And A Mouse

A Marmot’s Words: “Welcome To My World!”