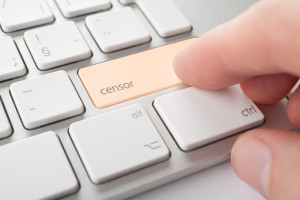 A recent study by Pew’s Global Attitudes Project confirms what we might have surmised even without a survey – that emerging and developing nations want freedom on the Internet, and that young folks are especially opposed to censorship.

Many Americans never give any of this a second thought. HealthCare.gov opens with a thud, we glance at the online pile-on, and then go back to our business. Twitter explodes with news of a congressman kissing a woman who’s not his wife, and we shrug. And then return to posting photos of our kids, pets and desserts.

Not to be preachy, but the freedoms we often take for granted don’t exist in many parts of the world. In China, where there are some 591 million internet users, authorities block Facebook and Twitter, and censor homegrown networks like Sina Weibo and RenRen.

In Turkey, Prime Minister Tayyip Erdogan banned Twitter and YouTube for spreading anti-government rhetoric, but his decree was overturned by the country’s highest court. In the meantime, Erdogan earned international scorn and the fury of his own people.

There are plenty more examples. In nations dealing with political unrest, like Venezuela and Egypt, social media is widely used to share information and organize protests. In Cairo, the sentencing of three prominent political activists sparked a sit-in outside the presidential palace. Information about the event was shared via Twitter.

In another instance, those posting memories and images about the tragic genocide in Rwanda warned recently about similar consequences if no one steps in to help resolve the current conflicts in Syria and Central African Republic, according to the New York Times. Will this powerful reminder spur action? We’ll see.

Technology, in short, is making censorship harder and harder. As it should be. Turkey is one of the best examples, in that when Erdogan implemented his ban, outsiders quickly rallied to provide Turkish Twitter users a work-around that got them back online.

It seems increasingly as though world leaders opposed to free speech are being taught the lesson the colonists taught old King George III more than 200 years ago. Just as Pew found young people across the globe are most opposed to government censorship, it turns out that most soldiers who fought for American independence were between 18 and 25.

Across the world, Evgeny Morozov, author of, “The Net Delusion: The Dark Side of Internet Freedom,” notes that calling China’s online censorship system a “Great Firewall” is trendy, but misleading. “All walls,” he says, “can be breached with the right tools.”