Dialing Down The Distress: The 1-Minute Breathing Box Meditation 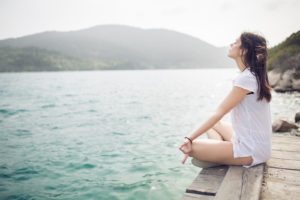 Everyone can use a simple method for going within, getting in touch with your deepest self and finding a bit of serenity when life gets too intense or seems crazy.

One of the best methods I’ve found is a simple breathing technique that provides an instant way to meditate, and can be done almost anywhere at any time with the exception of critical functions such as driving or operating machinery.

The technique, which I call the Breathing Box, is so natural it can be used at the office, or when children are pesky, or even for a momentary break during an angry confrontation.

Let me explain how it’s done. The only effort required will be inhalation, exhalation and suspension of breathing, as well as visualization.

This is as simple as meditation gets.

It has the benefit of concentrating your restless thoughts into the focused set of steps. Meditation’s goal is always to stop the eternal production of thoughts in order to find the gap between any two of them. I’ll tell you why in a moment. The second benefit is in slowing and regulating the breathing, for this also works upon the heart-rate and tends to ground or steady you. It’s especially useful if one is in a state of high emotionally, for it calms. It is also useful if one feels confused or distracted, for it centers.

These great benefits of meditation can’t be extolled enough.

Almost any mental process can be benefitted by shifting into a short period of the Breathing Box. If you have more time available, you can prolong this procedure by seeing how many beats feel comfortable during the suspension state (also known as the breathless state). You can also do the exercise for more minutes when that is allowable. Even a few seconds will serve to shift your mentality, help your physical experience, gentle your vibratory state, and (if you are extremely lucky) allow you to connect with your own personal divine experience, i.e., the feeling that you have been touched by a higher presence, or that wisdom is being made available to you from a deeper source.

“In the gap between thoughts, non-conceptual wisdom shines continuously.” – Milarepa

The Breathing Box is an invaluable tool. It is one of the techniques to perform the Quantum Shift, as I describe in my book, The Wisdom Keys, available on Amazon. Practice it when you can. Use it when you are able. It will make a big difference.

How to Meditate: Part I—Awareness of Breath Meditation

How to Meditate Part II: Mindfulness of the Body